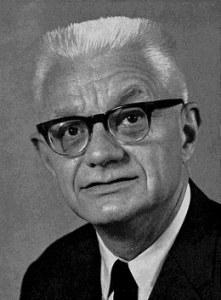 “The papers originate from Hempel’s office at Princeton University. The majority of the material was organized by Hempel according to various filing systems. Whenever possible, the original order has been maintained. The greater part of the papers is in English, but a considerable amount is also in German, and a few items are in French. The papers feature some early, pre-immigration material from Hempel’s European period while living in Berlin, Vienna, and Brussels. The majority of the documents, however, stem from his post-immigration period in the U.S. The papers are divided into five series. Hempel’s biographical material covers mainly the years 1928 to 1966 and comprises personal and educational records, such as diaries, notebooks, diplomas, and professional records, e.g. curricula vitae and employment correspondence. The correspondence series extends from the 1920s to the 1990s, with the bulk of the material concentrating on the years 1940-1990. The correspondence is subdivided into general correspondence; exchanges between Hempel, Paul Oppenheim, and Kurt Grelling; contacts between Hempel, Oppenheim, and other correspondents; family correspondence; and letters of recommendation, which are currently closed to research access. Documents in the research, lectures and publications series consist of Hempel’s research manuscripts and notes, lecture drafts, book inserts, and a variety of material pertaining to his conference participations, contributions, and publications, generally focusing on the years 1950 to 1990. Manuscripts on both the Carus and Gavin David Young lectures are contained in two separate subseries. Hempel’s teaching materials include folders he prepared for his graduate and undergraduate classes, in particular at the Universities of Yale, Princeton, and Pittsburgh, mostly covering the years 1949-1985. It also features a few dissertations and administrative documents. Please note that due to the sensitive and confidential nature of some of the material, access to this series is restricted. Finally, the offprints series is divided into offprints authored by Hempel and offprints authored by others. Offprints of others’ publications are organized from A-Z according to author. Most of them contain handwritten annotations and dedications to Hempel, and some prominent authors in the field are featured.”